Some parts of Kenya broke into song and dance as chaos and mayhem rocked others following the IEBC’s declaration of Uhuru Kenyatta as the winner of the just concluded, hotly contested presidential elections.
Reports of people being being shot and brutalised started streaming into social media platforms including Twitter, Facebook, Whatsapp and Telegram shortly after the electoral commission declared Uhuru the duly elected president.

Images of people shot dead, particularly from the lakeside town of Kisumu, a bastion of opposition leader Raila Odinga, were shared widely.

Conspicuously though, none of these incidences has made it to mainstream local media, pointing to a deliberate effort to black out such news.

Here are some posts on popular social platforms: 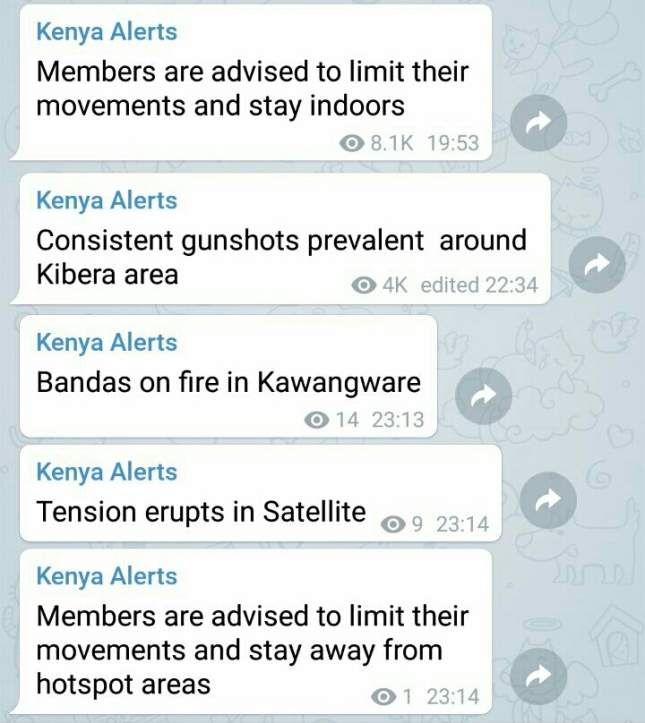 I'm hearing gunshots and my peeps call me from Kisumu telling me the city has erupted with a din like all city chasing nyawawa. Gnyt Kenya

I'm saddened by the unfortunate events in Kisumu. I still can't understand who gave the shoot-to-kill call. #StopKisumuKillings

Meanwhile some supporters of the ruling party could not restrain from gloating.

So we should all stay in the house in silence so that we don't hurt them? If NASA won would the stay indoors ?Let thm burn the entire Kisumu

While some goverment sympathizers have accused the opposition, pointedly Raila Odinga, for not calming their supporters, it is clear from the video below that is not the case. Opposition leaders were earlier in the day talking to supporters when they were attacked by police.

What is this? Govt sympathizers claiming opposition not calming down supporters but when they go to do so you attack them. Sasa mnatakaje!? pic.twitter.com/69NMlC803U

Despite videos and photos telling a contrary tale, Cabinet Secretary for Interior Security Dr. Fred Matiang’i as well the police spokesperson have said police are acting within the law to deal with looters and that no live bullets have been used. In the video below police officers are clearly breaking into someone’s house while calling for them to come out. Clearly contradicting the statement that police are not brutalising innocent civilians.

It remains to be seen if Uhuru will commit to unite a Kenya so polarised along tribal lines that it’s threatening to tear apart at the slightest provocations.